I guess my next post should have been some kind of summary of the winter season and the surrealistic feeling of receiving a Patrouille des Glaciers gold medal two days ago. But it has to wait. I have a story to tell…

The sun had just started to heat up our campsite, a few kilometres from Moab, on my first morning in the Utah desert. My plan when I got on my crappy mountainbike that morning was to check out Moab, and maybe go or a run if I could find some interesting place for that. I didn’t even get to that town before I passed some signs directing me to ”Arches National Park”. It was April 22nd of 2013, exactly three years ago. As I look back on that day, it might have been the first day of my life. Life as I define it.

Thinking to myself ”Andie was talking about those Arches, maybe I should check out the opening hours and prices for that park”, I headed to the entrance. I’m not sure if it was a day of free entrance or if it was free because I entered on a bike. But I didn’t have to pay so I figured I could have a look at those arches. Somehow I filled up my water bottles by that entrance, so I guess I must’ve been feeling I was heading for a longer adventure than expected. After three hours, 50 kilometres and an extremely beautiful scenery, I reached the end of the Park road at Devil’s Garden. Bikes were not allowed in there so I locked up my bike and went for a run. With nothing more than a map in my hand, I remember people asking me ”Where’s your water?”. ”Oh, it’s at my bike, I’ll be back there soon……..”

I was almost at the very end of that ”Devil’s garden” when I met Dorothy, the lady who asked me ”Are you an ultra runner or something?”. I said ”No no, I just run a little bit for myself whenever I feel like”. She also asked if she could have a picture of me, since it had been looking ”so cool” when I came running along that ridge. There’s not many pictures from my life, so I said ”Sure, if you can send it to me aswell somehow?”. I gave her my e-mail address and went back some 50 metres along the path, trying to ”remake” that run that looked ”so cool”. After speaking a little bit more, I went on running. The 12-13 kilometres through Devil’s garden took me almost two hours and I remember stopping for a rest due to ”not feeling that good”. I guess I was at bigger risk than I realised, but this beautiful scenery was so addictive. And it’s hard to turn back once you started, right? However, the road to Devil’s garden had been mostly uphill so the return was a little bit shorter. Even with some detours within the park, I arrived in Moab already two hours after finishing my ”little run”. In other words, I went for a run and I checked out the town. Just like planned. I just made a little bike detour along the way. It also sums up as my, by far, longest ”training” ever. About seven hours if I don’t count the pauses. Maybe I was some kind of ”Ultra runner”, after all?

I thought I’d never get those pictures Dorothy had been taking. But about two months later, a few weeks after coming back to Sweden, I received an e-mail. One of the pictures in that e-mail is easily a top-5 among my favourite photos from my life so far. Not only because it’s from the first day of my life, but also because I went for another adventure the next day. Biking/running to one of those snowy peaks you can see in the background. But that’s another true story my grandchildren will never believe… 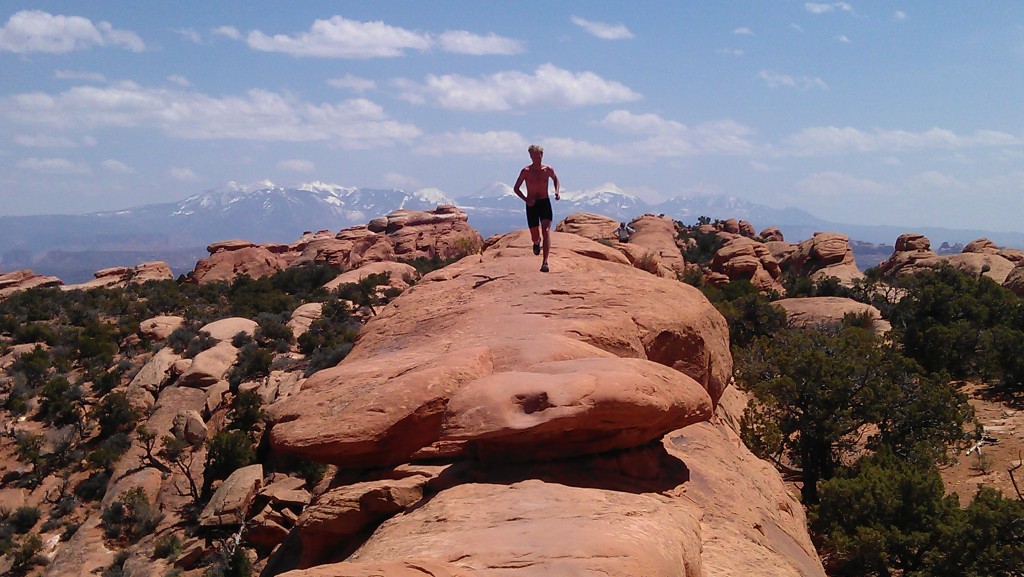 This picture carries so many words… Thank you Dorothy Gibson.

Map of my route that day (except the running, GPS device stayed with the bike)